“When a warrior has proven her devotion to Athulua through her brave deeds and exceptional skill in battle, the Goddess shows her favor by granting a spiritual emissary to aid the Amazon. These emissaries of Athulua are called Valkyrie, and they are the spirits of the greatest heroes from the Amazon people. The power to summon a Valkyrie is the greatest honor that an Amazon warrior can receive. It is believed this gift is a sign that your place beside the Goddess is assured when you pass from this world-perhaps even as a Valkyrie.”

– quoted from the Arreat Summit. 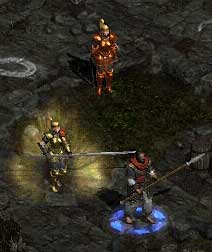 Since patch 1.10 the Valkyrie can use Critical Strike, Dodge, Avoid, and Evade. In fact she gains those skills from your Amazon, meaning all the points you spend in those skills will work for the Valkyrie.

The Valkyrie gains different pieces of Rare and Magic equipment based on her skill level. The items come with random bonuses, so every time you cast the Valkyrie the bonuses on her items will be randomly chosen.

The Valkyrie can appear in different colors, depending on what bonuses were spawned on her armor.

The following table shows which items the Valkyrie receives based on her Skill Level :

The Valkyrie appears in different colors based on what bonuses are found on her Armor. This works exactly the same way as it does on player characters. The following table lists some common affixes on the Valkyrie armor, and the associated color.